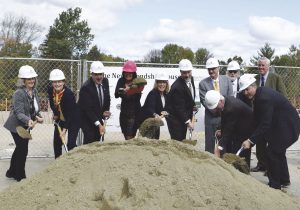 BETHLEHEM — Collaboration, perseverance, and optimism were cited as key factors leading to the ceremonial groundbreaking Friday of a new 32-bed $5.4 million Friendship House treatment and recovery center on Route 302.

Nancy Frank, CEO of the non-profit North Country Health Consortium, welcomed a crowd that included U.S. Sens. Jeanne Shaheen and Maggie Hassan. “Our communities have recognized that it is time to treat addiction as a chronic disease with a medical model,” she said.

The foundation has already been poured for the 17,588-square-foot center, which will offer a continuum of care to those battling drug and/or alcohol addiction. “It took an array of public officials and public monies plus nonprofit partnerships, as well as a truly remarkable anonymous $2.5 million philanthropic gift,” Claflin said.

New Hampshire is ranked second to last for access to substance abuse treatment. Friendship House will go in October from being under the aegis of Tri-County CAP to the consortium. In preparation for this step, former Friendship House Director Kristy Letendre of Berlin has joined the consortium as continuum care facilitator.

Letendre, who started working at the facility nearly 15 years ago as an “awake night manager,” praised TCCAP’s alcohol and drug services team. “They’re the recovery warriors, the boots-on-the-ground.” She also praised those who come for treatment: “They admit their shortcomings and have the courage to ask for help.”

In May, former Director of Operations Nathan Morin of Berlin took on the role of acting director. Morin, who earned a B.S. in political science at Plymouth State, said he anticipates the new state-of-the-art facility will be ready for occupancy in October 2018.

The current facility accommodates 30 co-ed residents, up from 18 before the fire marshal granted code waivers.

TCCAP CEO Rob Boschen said his predecessor, Michael Coughlin, concluded the agency did not have the resources to manage Friendship House. Working with AHEAD and the Consortium has allowed the agency to work out the best solutions, he said.

Shaheen said these solutions are a testament to the “‘can-do” attitude of the North Country.

Hassan said efforts like building a new sustainable Friendship House serve to strengthen the state as it deals with a substance misuse crisis. Hassan said she is pleased the president has signed the first specific law she has sponsored: All doctors must understand that all opioids are addictive. She also thanked those who struggle with addiction and their families for having the courage to speak to her of their experiences.

Gov. Chris Sununu was represented by Marty Boldin, his policy adviser for prevention treatment and recovery. He and Doris Enman, North Country Serenity director, spoke on behalf of those in recovery as a way of life.

U.S. Rep. Annie Kuster was represented by Brian Bresnahan, who read aloud a letter from her. “Expanding access to treatment for substance use disorders in the North Country is critical to helping address the opioid epidemic, which is having such a devastating impact on communities in northern New Hampshire and the entire state,” she wrote.

Woodburn led a moment of silence for those who died before adequate treatment services were available. “This is a minimum; we need to do more,” he said. “It is for those we have lost.”

The New Hampshire Emergency Rental Assistance Program (NHERAP) provides assistance to eligible residents of New Hampshire who cannot pay their rent and utilities due to the COVID-19 pandemic.

You are eligible for rental and/or utility assistance if:

We encourage you to fill out the application online.

If you prefer to complete a paper application, click here to download the application PDF. You will need to mail the completed application to the CAP with all required documents.

Note: The NH Emergency Rental Assistance Program is for renters, not homeowners.

The New Hampshire Emergency Rental Assistance Program (NHERAP) provides rent and utility assistance to eligible households who have been impacted by the COVID-19 pandemic.

The New Hampshire Emergency Rental Assistance Program provides rent and utility assistance to eligible households who have been impacted by the COVID-19 pandemic. Have you experienced at least ONE OF THESE in the past year?

•  Qualified for unemployment benefits after March 12, 2020

•  At risk of homelessness, paying more than 30% of your income for rent and utilities, or living in unsafe or unhealthy housing

•  Under a certain income level

The NH Emergency Rental Assistance Program will cover up to 18 months* of:

•  Past-due and future rent payments, including late fees and legal fees (back to April 1, 2020)

•  Other housing-related costs such as internet and relocation expenses including rental application fees, utility hook-up fees, and security deposits

*When necessary to ensure housing stability and subject to funding availability.

•  When you apply, we will assist you in identifying the information and documents you need. This may include documentation of unemployment, job loss, or hours being reduced, increased expenses, or other COVID-related income hardships.

•  We will review applications, and once approved, will process payments for expenses to landlords and utilities. We will make every effort to process each application as quickly as possible.

If you have already received NHERAP services and would like to request additional assistance please reach out to the CAP staff person who processed your services or email nherap@tccap.org.  You will need to complete a short online application for additional services and provide documentation if your monthly rent amount has changed.

Note: The NH Emergency Rental Assistance Program is for renters, not homeowners