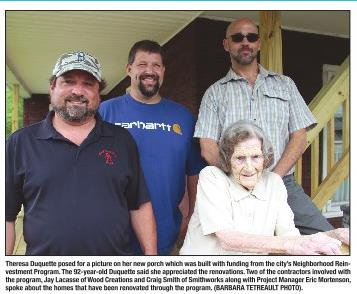 BERLIN — More than 90 homes in the city have seen needed upgrades to plumbing, electrical, and heating systems as well as improvements to foundations, roofs, and porches through the city’s Neighborhood Revitalization Program.

Just wrapping up its third federal Community Development Block Grant, the program has focused on helping individual homeowners with needed improvements they could not otherwise afford to make their homes safe, accessible and energy efficient.

Theresa Duquette of 193 Willow St. is an example. The 92-year-old widow has lived in her house for 44 years. The porch was starting to collapse, and after reading about the program in the paper she called to apply.

New roof supports were put in place and a new deck installed. A new railing was put on the upper deck to meet life safety codes. The electric meter box also had to be moved and replaced.

“I appreciate all the work they did,” said Duquette, who worked at Brown Company before retiring.

Linda White, former housing coordinator for the city has overseen the program and continued under contract to finish out the current grant after leaving the city. The three CDBG grants have totaled $1.35 million and White said the program has partnered with Rural Development and Tri-County Community Action Program’s weatherization program to maximize the dollars for qualified homeowners.

The latest $500,000 grant has provided needed improvements to 29 homeowners representing 38 housing units. A majority of the housing units received upgrades to hard-wired smoke and carbon dioxide detectors and ground-fault circuit interrupters in kitchens and bathrooms. Properties in the program received a variety of upgrades from new roofs and energy efficient windows, to electrical upgrades and foundation improvements.

Many of those assisted were elderly and/or disabled and all qualified as low to extremely low income.

As part of the grant requirements, the city advertises for and hires both a project manager and HUD inspector. Tri-County Community Action Program has been the only applicant for project manager and Eric Mortenson of that agency was the manager for this grant.

Dann Dodd was hired as the HUD inspector, inspecting all the homes and identifying items that need to be addressed. Mortenson obtains quotes from contractors and the Berlin Neighborhood Reinvestment Committee approves quotes for each home.

White and Mortenson said getting contractors is difficult because of the paperwork involved and the fact half the money is paid upfront but the rest comes after the project is complete.

White said the city has been lucky to attract several very good local contractors willing to work with the program. Two are Craig Smith of Smithworks LLC and Jay Lacasse of Wood Creations. Both based in the Androscoggin Valley. Wood Creations has its own sawmill in Milan and does remodeling, log furniture, as well as new construction. Based in Berlin, Smithworks does residential and commercial contracting. Smith said he has spent the last five years renovating and rehabbing residential apartment complexes in the city. He pointed out one of his projects is at 212 Willow St., near the Duquette property.

Lacasse said both contractors worked with the Neighborhood Reinvestment Program to help out the homeowners and community. In some cases, he said they absorbed some costs to enable the homeowner to get the necessary work done.

“They definitely gave us their rock bottom prices,” said White.

“We were trying to improve our town,” added Smith.

Lacasse said improving the city’s housing stock helps to protect the tax base.

The two contractors said they couldn’t have provided some competitive prices without their subcontractors. They named Andy Leblanc Heating, Peppy’s Electric, Androscoggin Electric and Fortin’s Burner Service as subcontractors that worked at reduced rates to allow some of the city’s elderly and low-income residents to enjoy safe and energy efficient homes.

White noted Berlin is the only community in the state that has used CDBG money to improve individual homes. She said the average home in Berlin dates back to 1938, making the city’s housing stock among the oldest in the state. Many homes, she said, need upgrades to plumbing, electrical, heating, and energy systems. But the economy, in large part has put many in the position where the cost to protect their investment and increase energy efficiency is prohibitive

The New Hampshire Emergency Rental Assistance Program (NHERAP) provides rent and utility assistance to eligible households who have been impacted by the COVID-19 pandemic.

The New Hampshire Emergency Rental Assistance Program provides rent and utility assistance to eligible households who have been impacted by the COVID-19 pandemic. Have you experienced at least ONE OF THESE in the past year?

•  Qualified for unemployment benefits after March 12, 2020

•  At risk of homelessness, paying more than 30% of your income for rent and utilities, or living in unsafe or unhealthy housing

•  Under a certain income level

The NH Emergency Rental Assistance Program will cover up to 18 months* of:

•  Past-due and future rent payments, including late fees and legal fees (back to April 1, 2020)

•  Other housing-related costs such as internet and relocation expenses including rental application fees, utility hook-up fees, and security deposits

*When necessary to ensure housing stability and subject to funding availability.

•  When you apply, we will assist you in identifying the information and documents you need. This may include documentation of unemployment, job loss, or hours being reduced, increased expenses, or other COVID-related income hardships.

•  We will review applications, and once approved, will process payments for expenses to landlords and utilities. We will make every effort to process each application as quickly as possible.

If you have already received NHERAP services and would like to request additional assistance please reach out to the CAP staff person who processed your services or email nherap@tccap.org.  You will need to complete a short online application for additional services and provide documentation if your monthly rent amount has changed.

Note: The NH Emergency Rental Assistance Program is for renters, not homeowners